Today I decided to go at the funeral of Seh Daeng, a royally sponsored event, due to his status as an army general, which feels in many ways like a closure of round 2 of the struggle between red shirts and the Thai state.

A body was burned, leaving an ash heap taken by the same wind that blew the fumes of more than 30 buildings around Bangkok, and more than 90 bodies around the country. Commodities and people, reduced to the same ashes back into the circle of life. Commodities that were supposed to protect the people from an attack by the state, at least in the idea of red shirt leaders, who decided to move the protest to Ratchaprasong, and then now rest with them, scattered.

I arrived through a congested Nakhon Sawan Road and park my bike besides a portable toilet truck. Around me large crowds of people completely dressed in black enters the gates of Wat Sommanat Wihan. Here and there a red hair slide, a red rosette, or just a small red ring completes the outfit together with a small beautifully white paper flower. 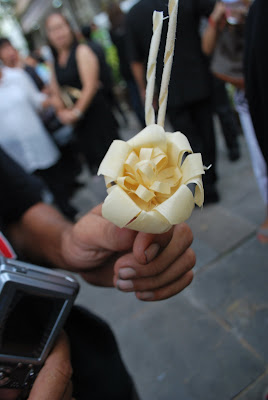 Outside the ubiquitous batteries of street vendors fill the street with smell of Isaan sausages and fermented fish. Around them few vendors sell pictures a Seh Daeng in a military salute and black T-shirts with his picture printed. A policeman stops to bargain with the older vendor for a T-shirt. 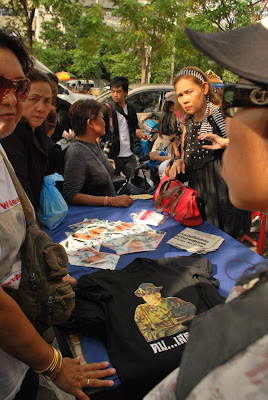 Other vendors, set on the sidewalk, sell red shirts’ gadgets, probably leftovers from the protest, given the discounted prices. At the sides of the gate two men, dressed with a Thailand Post Service’s T-shirt, sell for 2 baht each empty postcard to send to the pre-printed address of the newspaper Thai Rath. I am not sure why. 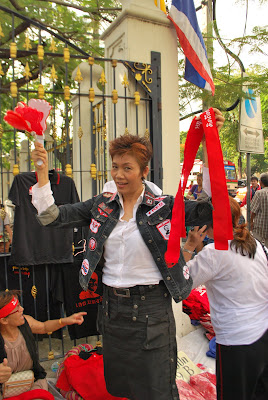 I walk in, passing through small groups of people speaking quietly. As I walk by I hear only snippets of conversation “Snipers…. Shoot… Aphisit… bodies… jail… invisible hand…” People around, with dark faces that match perfectly their outfits, speak softly, looking around and interrupting frequently their conversations to tell one another “You know right? But we can’t talk…” and smiling in sign of reciprocal understanding. I figured this is going to be a hard place to interview people so I just wonder around. 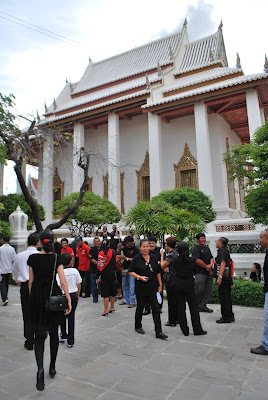 The atmosphere is quiet, with this small clustered groups getting denser as you get closer to the stage and the inner temple, until ending in an endless see of black. For one day red and black shirt really are the same.

In the compound people look for a place from which to see the few LCD monitors around that broadcast the ceremony by climbing the white walls of the temple as others just sit on the usual tinfoil mats, waiting to give their final greeting to Seh Daeng, or walk around in silence. 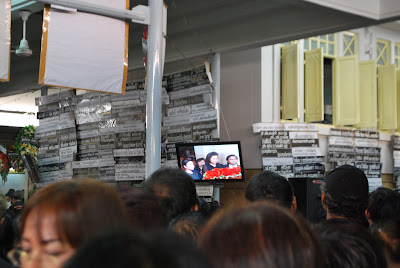 I decide to sit there, accepting the impossibility to get closer to the ceremony, and start chatting with an old couple, sitting on a rare patch of green. The old man offers me to sit and start talking about the violence of the army. “ I was a soldier” he says staring at me under his sunglasses “and I have never seen this behavior. This is Thailand now. This is what this government is doing.” He looks around as he speaks as if somebody could be listening to him from inside the temple. “Now we cannot talk, it is dangerous. Even now they may be recording us and then come to arrest us. We all want to talk, we all have many things to say but now we cannot.” He keeps repeating this but he can barely curb his passion. Fear and wanted to voice his truth mix in the conversation, syncopated by a repeated “Fuck.”

It is harder to talk to red shirts now because of the specter of repression yet the fading of a unified rhetoric, previously broadcasted 24/7 by loudspeakers, makes conversation more personal, less standardized. We talk for a while with him and his wife which after few minutes pulls out of her bag two pieces of paper and asks me to write down my website and phone number for the two of them. “Aphisit in all of this has no real power, there is another hand, a hand we cannot see and we cannot talk about that needs to be cut off.” In front of us a man is talking loudly to some journalists and for a second it feels like back in Ratchaprasong, where such performances of anger where promptly offered to everyone willing to stop and let people express their feelings. I greet the couple and move toward the temple.

A young woman stops me and invites me to interview a group of four well dressed and well spoken women, standing in the shade. I start talking to them and in few minutes the roles reverse. I find myself interviewed on media circulation internationally and what I have seen during the protest. A man walks through and tells me in English “We just asked for democracy and for the government to step down and have election but he only gives us bullets. Who is the terrorist? Who is the criminal?” He wais and walks away.

A small crowd gathers. The most vocal woman of the original group, who works at Bangkok Bank (“I am very sad there” she says “but is my job”), asks me “If you were Thai, what would you do now?” Moment of silence around. A bigger group forms around waiting for some answer and rapidly disperse as I babble something about needing to find out the truth first. The bells that signal the end of the ceremony ring around us. Saved by the bell.

I suddenly find myself into a moving river of people dressed in black, pushing softly each other toward Seh Daeng’s coffin, directed by a voice that repeats with irony to follow the directions of the officers, at least for today. I feel lost in this advancing endless see of people, silently moving with small white paper flowers in their hands glittering in the sun. 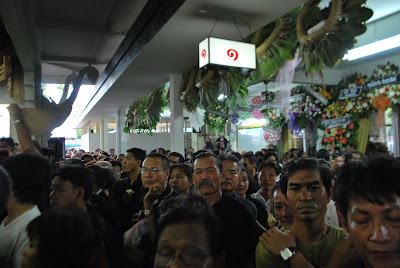 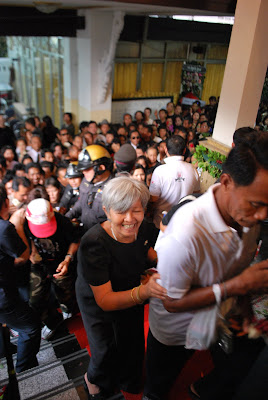 It takes about an hour to reach the body, hidden behind a curtain. I stop watching the hypnotic movement of people around a golden urn, on which they rapidly depose the flowers. Few seconds and they are out in the sun, scattered and ready to go home. Some people stop in small group to discuss. Temples are becoming again a “safe area” for red shirt, one of the few spaces where they can gather without having to worry about the Emergency Decree.

As I walk out a woman I met in the train going back to Udon after the dispersal calls me. She was without shoes then, she is very elegant now in her black dress and black shoes. “I came all the way from Udon to be here today” she tells me and she walks away into the crowd leaving.
Posted by sopranz at 11:05 2 comments:

I got back to Bangkok a couple of days ago, in this odd state of apparent calm and return to normalcy. It doesn't take long, however, to realize that things are not back to normal. Whispered here and there words of strong criticism or open satisfaction fill the streets. New tides of state propaganda and media repression is growing, it was much easier to read websites about Thailand when i was in Italy. On the other sides rumors of disappeared bodies, of unspoken brutality, and creative retelling of events proliferates, feeding an unhealthy feeling of suspicion. In a day I have heard people on both sides of the spectrum, red and yellow, say referring to the others "they are not people, they are animals." Dehumanizing your neighbor, your colleague, your servant, your friend it has never been a good sign, anywhere.
Posted by sopranz at 05:30 1 comment: