After the dispersal- Part 2- May 19th

I went out again in the late afternoon, trying to get to the Ratchaprasong area before the sun goes down and the curfew kicks in. I drove toward Silom and pass walking the first military road block in Soi Convent. The Thais passing through were register by a soldier sitting on a small table on a side of the street.

I ask the two soldiers who stand at the road block if it is true that they burned Central World and Siam Paragon. The young officer with deep dark eyes looks at me confused. I ask again. “I don’t know where these places are” he answers “I don’t know Bangkok”. Great way to keep your soldiers safe in a conflict occurring in an urban setting. I pass them and walk to Silom. The street is completely empty and very dark. Three armored vehicles are park in the middle of the street on the other side from where I came from. Some soldiers sit around them, with their uniforms half taken down laughing. A line of military walks down from Ratchadamri with very tired faces. I smile at them, they don’t smile back.

The Sala Daeng intersection is completely different from last time I was here. The tires and bamboos sticks that used to be a barricade sit in huge piles on the side, close to the statue of Rama VI. 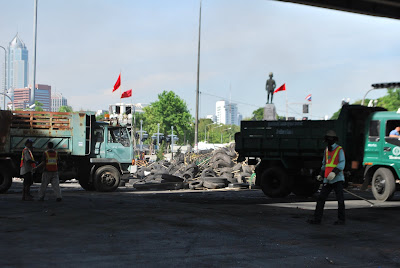 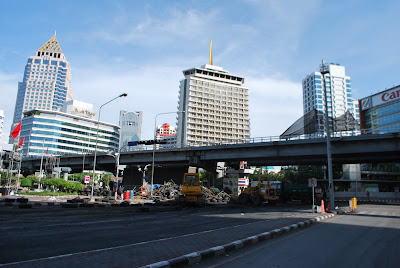 Three bulldozers are pulling them up and let them fall into dark green trucks. The asphalt is carved by the signs of caterpillars, plastered into the thin layer of burned rubber. I sit there for a while looking at the mechanical force removing the weak defense structures. A bunch of men in BMA workers vest direct the movement with their hands, covered by the noise of engines. How many of them are red shirts supporters not only defeated but also busy clearing the area, I wonder unable to go talk to them.

I walk down Ratchadamri road. The place is surreal and feels haunted. For the first time since I came to Thailand I can hear the twitter of birds in this area, normally covered by the noises of traffic and for the last month by the broadcasted speeches. The place feel like the people living in it just disappeared suddenly. Everything is left there. Clothes, fans, Tvs, motorbikes, unfinished food, half cooked rice, piles of vegetables, half opened tends, monks clothes, wallets, documents, bags, red paraphernalia, medicine, sealed water glasses still cold . Everything as in a crowded scene, just with people erased. That deafening sound of birds, echoing in the emptiness. 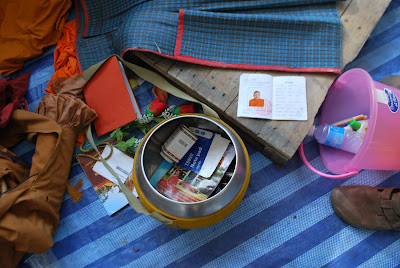 I walk through Ratchadamri, leaving behind me a burned toilet bus across the street after Chulalongkorn Hospital. On the other side of the street a giant pile of black bags of garbage stands attracting flies and an incredible number of grey pigeons, picking some leftover food coming out of the pile. 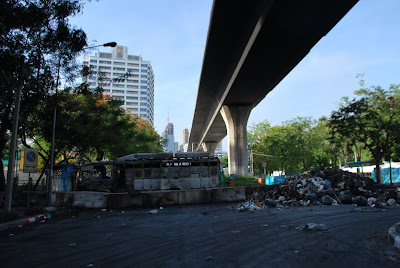 Along the street few human pigeons do the same, going timidly through the stuff left over picking up the best pieces and putting it in their bags. A man, also wearing the BMA vest, notice I am staring him as he puts a electric plug into his black and white bag. “Recycle” he tells me breaking the silence and making his way through some bags. Further down three man pile on the back of a pick up all the electric appliances they can find. Most common item the fan. 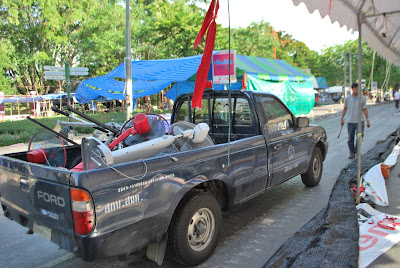 As I walk down the road, passing Surasin a group of military sits on the left side of the street. I greet them and they tell I cannot go further as the area is not secured yet and there are still snipers around. Four of them sit around. Behind them, in a small space between two buildings about twenty protesters sit on the ground, their hands tied by a black plastic cord. 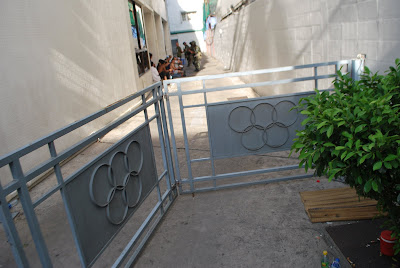 One guy pulls his hands up and get them close to the mouth of another prisoner who smokes a cigarette from his hands. As I move to take a picture a soldier gets close to me and picks up bullet near my feet, hiding it in his pocket. I look around and find another one, take a picture and then pick it up. 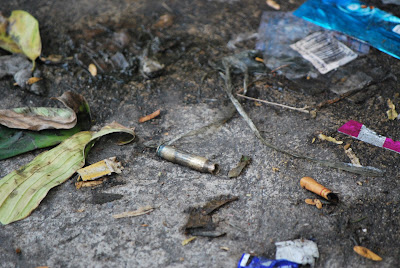 I go back to the soldier and ask “Is this a M-16?” he looks at me without saying a word, takes the bullet , turn around, and hides it in his pocket. “Can I have that as a souvenir?” I ask. “How about one of this” showing me the plastic cord with which they arrest “as a souvenir?” I get the message and walk back. A young guy walks down Surasin and a military officers in plain clothes shouts at him “Come here or I shoot” holding his phone attached to his paint. “I shoot”. The guy keeps walking. A soldier in uniform pops out. The guy now starts running into a soi.

I walk back to the entrance of Lumpini Park. Their police officers are going around taking pictures of red shirts posters and graffiti left on the wall with their cell phones. A young police man picks up a red shirt with a picture of Thaksin doing the Karabao sign. He smiles at me and walks away with the shirt. Other two policemen are collecting red paraphernalia. They see my camera and ask me to take a picture with the two of them holding a red shirt bandana with written Truth Today. “We are completely red shirts. The police officers are red shirts” they tell me. “Please report the real news, please help us.” They walk away with the bandana rescuing “insignificant” pieces of history left behind by the reds.
Posted by sopranz at 06:13