Before Departure- May 20th

I arrived at Hualongpong train station around 4pm. The huge hall was full of people, with a compact crowd sitting in the middle of the station on the ground, underneath the huge painting of Rama V. I ask around if the train with the protestors already went away. Most of them already left but the train for Udon is leaving at about 8.25.

I walk back to the people sitting on the ground and ask around who is going to Udon. Pretty soon I am seated with a group of about 20 people, directed to Udon. They come and go, taking off their shoes before sitting on the ground as if they are still in the We Love Udon tend near Lumpini Park. They all look demoralized, worn out, and unsure on what next. 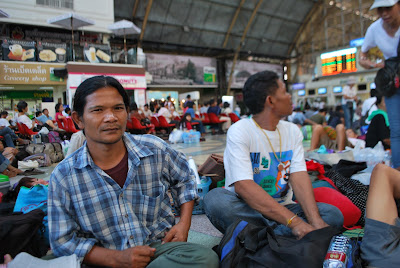 I start talking to a young man. Long hair and beautifully shaped dark eyes. He speaks quietly in a polite but firm voice. As the people around him listen, occasionally throwing some sentences into the conversation. He is from a small village closed to Udon. He has been at the protest for than two months leaving behind 10 rai of land from which he gets enough rice for him and for selling, making some extra money and food by raising chickens and fishes. “I wasn’t here last year” he says staring at me “but this time it was too much so I came to Bangkok to protest.” “Had you been in Bangkok before?” I ask. “I used to live here, I worked as a security guard. Life here was too chaotic for me so I decided to go back home and live in the country side.” He does not have a family or kids.

“ I haven’t thought about a girlfriend since a long time” he continues. “It is difficult with women, you never understand each other and I want to have a calm life”. “What about your parents?” I asked. His eyes become opaque for a second. “They died 25 years ago” This makes him 9 or 10 when his parents departed. “We have been alone since then. Me and my two sisters. One is married to a Farang and lives in Finland now, looking after her husband’s strawberry farm. He has a problem with alcohol but she has a good life. I even learned some Finnish, so I can talk to my niece, when she comes to visit. The other ones is still in Udon. She is married so I live alone now.” “Are you happy about going home?” He stops for a second. “We came here to bring democracy and we go back without having obtain that. Many people died. Soldiers killed us. We are all very sad.”

I turn around and the small crowd is listening, looking down for a moment. An older woman takes up the conversation. “What is this? Killed indifferently by soldiers. We are Thais and we get killed by snipers whose weapons are paid with our taxes. Is bad, very bad. The government has double standards.” One after the other everybody says something about what just happened asking my opinions on the present events and how the “people of the world” feel about Thailand.

Two men in black shirts come around. “We will fight again” they say, trying to raise the morale of the group. “It is not finished” the young man echoes “We are going home now but no one has won or lost yet.” “What next then?” “We will keep fighting against this government and the ammat. Maybe not in Bangkok but we will divide in small groups all around the country and keep burning things if we need to. There is nothing else we can do. The government doesn’t accept our requests and kill the population. We are unarmed there is nothing else we can do and now we know that peaceful protests don’t work. Peacefully we just die.” The conversation dies out and a dense silence falls over the small group as an old woman repeats with a soft voice “We won’t accept this, we cannot accept this. Red shirts cannot lose.” This return has the bitter taste of a defeat. Days and days spent in a hostile city, in the middle of buildings overlooking them, symbols of a life they cannot partake in and from which death, by hands of snipers, descended upon them.

A younger woman comes around, distributing food to the group and asking if everybody is ok. Behind me a woman sits in her dirty clothes without shoes. “They remained in Ratchaprasong” she said. “I run to the temple without shoes and I was too scared to go back to get them.” The young woman keeps walking around delivering small packages of rice and pork. “The people in Bangkok have helped us” the young man breaks the silence “Many came to bring food, water, and to offer money. This time the government have seen that is not only about Isaan or Thaksin and that the population will not accept everything they do. We did not obtain democracy but we have not accepted what the government did. This will go on.” 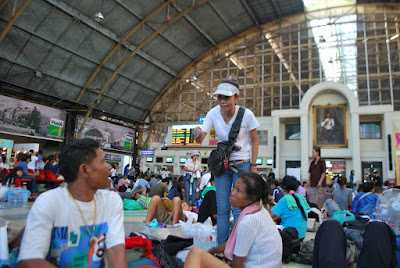 The young woman comes back distributing medicine to anyone who wants them. “You see” another woman says “if we didn’t know her we wouldn’t take the food or medicine. They already have tried to poison our drinks in Sarasin some days ago. We need to be very careful. The young woman walks back to other three friends, all dressed in white and wearing a hat. I stand up and go out to buy cigarettes. 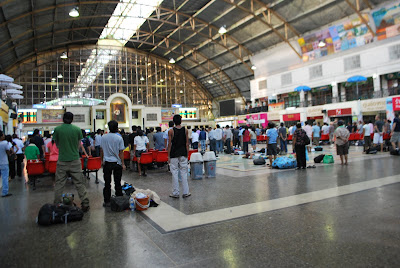 Around the atmosphere is grieving, many tense faces and wet eyes in the middle of the few bags and objects that they have been able to retrieve in their escape from the advancing tanks of the military. “What do you think about the leaders?” I ask. Here a big conversation erupts. Somebody says “You need to know when to stop. The military would have killed us all, so they need to surrender.” Others, instead, say they are dissatisfied with the leaders who run away when the military attacked. “We are not satisfied” the young man says “we don’t know what we will do next or who will be the leaders but there is no problem, we have many leaders, in each village. I promise this is not finished.” Again the situation calms down and I get out of the station with him to pick up big plastic bags full of food, delivered by a taxi outside the station. We distribute the last ratio of food and water, as people store both for the long trip ahead.

An older woman stands up in the middle of the crowd, as people around her applaud. She is 82 and she has been at the protest since the 16 of March, sleeping on a mat on the street. “She is the oldest person in Ratchaprasong” an older woman says to me as she listens carefully to what the woman says in her barely perceptible voice. “We will continue to fight for democracy” she repeats out loud as smiles come back for a minute on people’s faces. 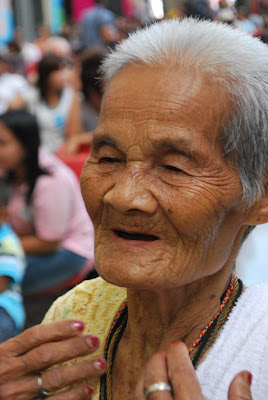 Soon after a well dressed man in his forty comes around to greet people and tell them that they are not alone and that there will be other way to fight to obtain democracy. “He is the Phua Thai MP in Khon Khaen” a man says in my ear. The man walks around the small crowd stopping to talk to some people for a second and hugs the old woman, after waing profusely to her.

It is time to board and everybody moves to take their place in the four special cars at the beginning of the train reserved for the people of the protest. 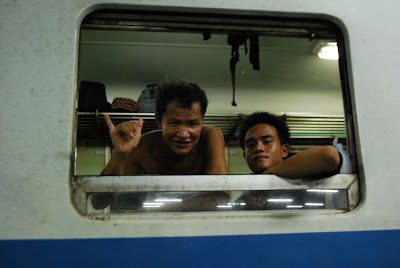 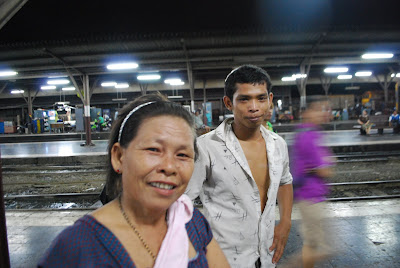 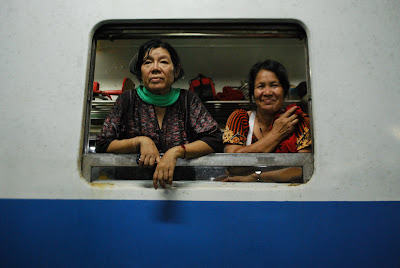 “Aphisit is so generous” says a man as we step onto the empty car “He kills us first and then reward us with special cars.”
Posted by sopranz at 10:41

Great account. I am glad someone is documenting the story of these people as it so important for both them personally and Thailand as well. Fantastic to see their resilience.