Around Bon Kai and Klong Toei- May 16th

I got out in Suan Phlu, completely calm during the day, and found a woman selling sweet bread who told me that the people in Bon Kai cannot exit their home to buy food so she is roaming the area selling food door to door. I greeted her and drove to Ngan-Dumphli. The soi was more filled with people than yesterday, maybe also for the later hour. Everybody was tucked again to a wall on the right side of the soi, to hide from snipers. The front of the soi had been closed with a barricade of tires, this time not burning. Without smoke is possible to see the other side of Rama IV, where a similar group of red shirts was cluttered at the beginning of a small soi. 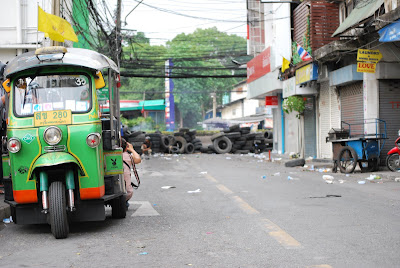 From a nearby house a family was leaving the house, with some belonging stuffed into a big green bag, moving for some days to friends’ house in another part of Bangkok. Many people in the area, Thais and foreigners, are doing the same, scared away by the potential expansion of the conflict, or stocking food and beverages in the house, ready to be cut off from the rest of the city. The people hidden behind the barricade throw once in a while a firework in the direction of a building on the other side of Rama IV, where they say snipers have been seen. Every successful shoot is met with a cheer from the other people and a clap to the launcher. On the other side the military, about a 100 meters away down Rama IV keep shooting in this direction, without really doing much damages. “They have finished the rubber bullets” one man tells me, as he pulls down is white mask “now is just the real ones”. The motortaxi guy who has been organizing the movement of people there is still shouting directions to everybody, from few meters away. The groups at the front is made up of six or seven young Thais in black shirts and an equal numbers of journalist in blue bullet proof vests and a blue reinforced helmet. 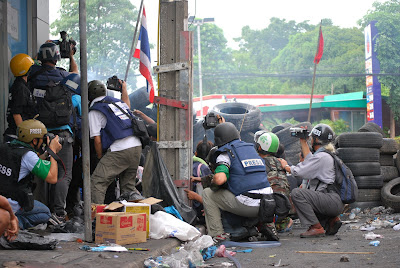 The number of journalists compared to the protesters gives the scene a funny taste, perfectly emblematic of the incestuous relationship between reality and perception through media. After a while a tuk-tuk stuffed with food and water arrives in the soi and drops four big bags filled with the white carton containers filled with rice and plain omelets. I sit there for a while watching the people taking turns in the front and coming back to eat something as a young man arrives with about ten fireworks. 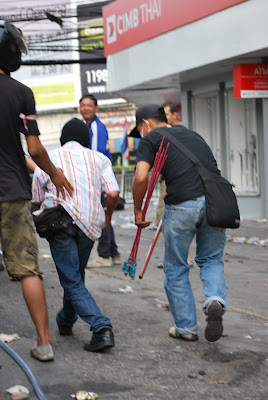 I decided then to move down to the Rama IV intersection toward Klong Toei. Here about 500 people are gathered, too far they say to be reached by the bullets of the army, but constantly watching the buildings, especially the Siam Commercial Bank down Rama IV, from which snipers have been shooting the day before. 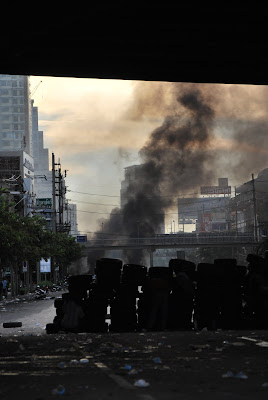 Early in the morning, an old man says, two people have been shot here by a yellow shirt guy from one of the building. The area have been totally claimed by the protesters who have build tires barricades on each of the four entrances and exits to the elevated highway and two lines of barricades extending for the whole of Rama IV. 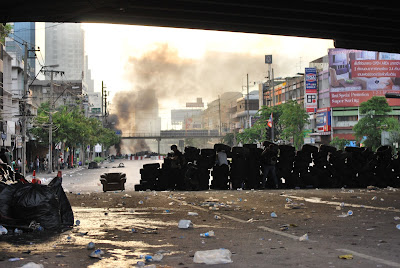 Three of those barricades are burning, as people from the side of Rama IV, protected under the highway make tires roll to the people hiding behind the barricade who constantly refurnished the burned ones. On the back, in the direction of Klong Toei a line of parked motorcycles divide the “dangerous area” from the “safe one” as people explain to me, but the distinction seems hardly real. Behind this line a huge crowd of probably a couple of thousands of people stretches down the road where a rudimental stage has been set a couple of days ago. Motorcycles are parked everywhere peppered by some cars and taxis. 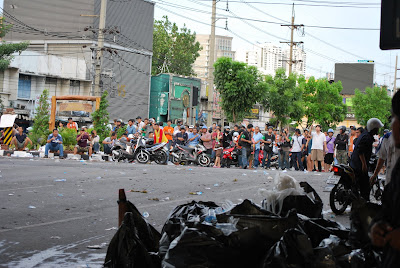 The police booth right under the highway has been claimed as a sort of “war room” in which some of the leaders discuss and come out occasionally to direct the constant delivery of new tires with big pick-ups and to tell the crowd to take it easy and stay calm. As I talk to some motortaxi drivers whom I know a big pick-up brings food to the area and a motortaxi drivers uses a traffic cone to direct people into making a chain to unload the food and tell everyone to come get their portion, one box each and one water bottle. As the process goes on another man in black gear comes around and start calling people to take their bikes and go with him to an undisclosed place. He wants fifty of them. The call awakes the crowd as people frantically run to take their motorcycles and join the group that is forming underneath the highway. Every new bike is welcomed by the cheering crowd. The people around are shouting not to take pictures in this moment so I take away my camera and walk around, as people are covering their license plates with opened boxes and the motortaxis in the crowd take down their vests. One man in the middle of the group tucks a big axe into his paints pushing on his bear torso and puts on a military jacket to hide it. As they get ready as the deaf sound of a sniper gun, a scream. and people running away from the corner with Rama IV breaks the moment. An ambulance car drives through the crowd hastily and picks up an injured man down Rama IV, I run in that direction but is too late to see where he was hit.

When I turn around the small motorcycle battery is already gone. I decide to drive back in the direction of Bon Kai, as the red light of sunset refract and disperse into the smoke coming from that direction. As I drive there a black guard with a visible headphone coming out of his ear stands in front of a tires shop, maybe patrolling their tires source. I arrive from the back streets of Soi Ngan-Dumplhi the air is filled with the scent of burning tires. Here the scene looks exactly like yesterday in Ngan-Dumplhi : a small soi with a thick wall of smoke and fire at the end and constant launches of Molotovs to keep the tires burning. Again the sound of bullets from the military fills Rama IV. The only difference is that here people seem not to be concerned of snipers and move freely in the soi. I sit there for a while as the darkness conquers the area. Shapes of man carved into the red flames. 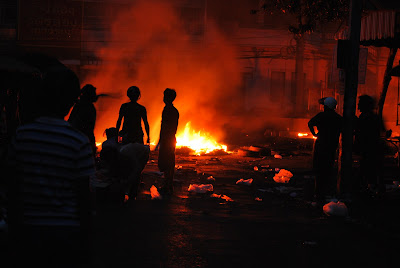 I decide to go back to Ngan-Dumplhi and check the situation there. The soi now is almost empty and totally dark, no fire, no light. I sit with a group of people on motorcycles that sit middle way through the soi and tells me is too dangerous to go forward. Today all of this back sois are filled with people, discussing or just listening to the evolving events. An older woman comes to me and shows me a xeros copy of an indistinguishable picture of dead bodies, claiming they belong to soldiers who refused to shoot and were brought back to their military camps and shoot dead. To me it looks like some grey image with a couple of distinguishable faces. She asks me to take a picture of it and tell the people in the world. I tell her I can barely see anything and I go back to the motorcycle crowd. One of them offers to show me where the snipers are and give me a tour of Soi Goethe, explain to me how to recognize what weapon the people are using. Short dry sound, sniper. Longer clear sound, rifle. Dry loud explosion, M-79. As he explains he mimes with his mouth the sounds and translates the noises that we hear around. He speaks quietly, hiding in the blackness and moving careful wherever a wall of a residence ends. A loud explosion sound fills the air. “This is us” he smiles “when is this loud is just fire-crackers”. The soi is interrupted by low barricades made of sand backs, covered with dark green cloth. “To prevent the army to come here from Sathorn soi 1” he says as he points in silence to a tall building on overlooking the area. “They are there” he whispers “be very careful”. This section of the soi, right before the Goethe Institute, is really dark I can just feel people wearing black moving around me but without really seeing them. I don’t like this place so I decide to go back and go check again at the Rama IV intersection.

The situation is pretty much the same as before but the crowd is much smaller and the frequency of the shootings has relaxed. The tenth person today (prize) comes in my direction and asks me if I think that the UN will intervene and I give my standard answer now, explaining the problem for the UN in intervening in internal matters. He looks at me discouraged, lights a cigarette and stares into the empty. I leave the area, way too dangerous at this point, and walk down in the direction of the stage. People sit around a small stage made up of what looks like a very big table where speakers, mostly organizers from the nearby slum, step for a short while demanding that the government “stops killing the population”, spaced out by red shirt songs, to which some of the listeners sitting on the street pavement around the stage dance. 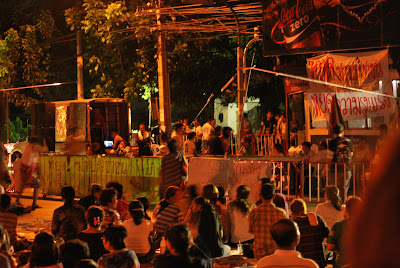 The atmosphere is similar to a village fair in the middle of this gigantic city: street vendors, families hanging around, people sitting on motorcycles, and a constant flow of people walking up and down. I see there a couple of motorcycle taxis whom I know and chat with them, showing my pictures and explaining what I was down Rama IV, everytime this happens a small crowd comes around to watch the pictures, ask information, and tell me that in Ding Deng some soldiers are not Thai but Khmer people brought in by Newin and paid to so a job that fellows Thais refuse to. Whether true or not, these rumors tells, as the other myriads flooding around the protesters, are a fantastic commentary on collective fears, nationalistic sentiments, and perceived enemies of the red shirts and their personal attempts to make sense of the ongoing situation. I walk to the stair and a local Klong Toei organizer tells me that they are going to build stages like this all around the city, as they already did in Victory Monument, he claims, reproducing and fragmenting the peaceful protest in Ratchaprasong. 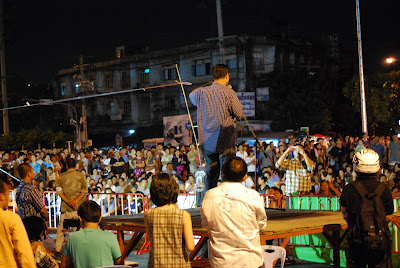 The peaceful village fair atmosphere, however, takes a minute to transform in dense and silencing fear. As I stand behind the stage the light goes out, as in the rest of Rama IV, and a loud explosion breaks tears the joyful mood. Silence comes, with people frantically taking the speaker down stage, and stand up from the pavement. The minute of dense tension, with people running around is eased by the return of the light, as the next speaker comes to the stage.
Posted by sopranz at 11:03