Rama IV/ Soi Ngan Dumphli
In the morning Suan Phlu is restored to normalcy and the small crowd at the beginning of the soi is gone. Sathorn Soi 1 first remains closed around Lumpini Tower with about 20 soldiers resting in the shades cast by the walls around the building. Soi Ngan Dumphli, differently from Suan Phlu, is transformed by the on-going fights. The soi is relatively empty and the large majority of motor-taxis, normally sitting at every corner. seems to be gone, not clear where. As I get closer to the Rama IV intersection a small crowd of people, about 50, sits on their motorcycles and on the ground, in front of a burning plastic rubbish bin. Rama IV looks like a post-war zone. A garbage collection truck is smoking in the middle of the street in front of the side entrance to Suan Lum night bazar. Behind the truck the army has set a small protection wall with black sand bags. A tense silence fills the huge empty road covered in debris, burning tires, and broken glass from small hand-made Molotov and shatter phone boots. 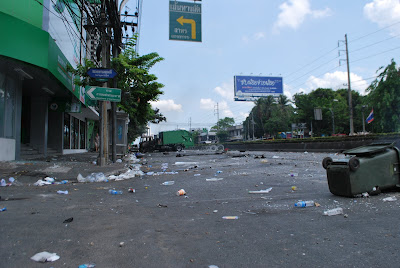 Sporadically a man walks out of the small crowd and shouts, amplified by an orange traffic cone,”buffalos” or “animals” to the army to which the soldiers reply with a short rounds of rubber bullets in the air. The silence is restored by the soft sounds of rubber bullets falling on the ground. On the other side of Rama IV, toward Klong Toei, four big truck tires are burning filling the air with thick black smoke. Inside Soi Ngan-Dumphli, back from the crowd a small group of motortaxi drivers drinks beers and show me the signs of bullets on the walls around the area. As I talk to them a younger man in black gear walks pass me carrying a small plastic bag filled with empty small red bull bottles. A hole has been carved on the top, from which small pieces of cloth come out. The guy sits on the sidewalk at the entrance of the soi and start filling the bottles with petrol.. The scene is grotesque. The Molotov keeps smashing on the ground with no effect as the crowd voices its disappointment and laugh. The guy keeps making them trying to find a working mixture. They seem all but highly trained paramilitary forces. 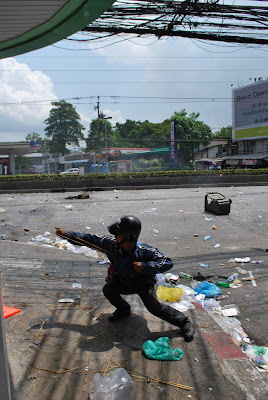 In the middle of this an older Australian man walks slowly in the middle of Rama IV trying to take pictures with his small self phone. He walks toward me asking if I know how to do them and after I show him he walks back happily, ignoring my call to be careful, as some people hide behind the smashed phone boots throwing small stones at the police with slingshots.
Posted by sopranz at 10:59