Silom has been closed since Narathiwat with military checking who gets in and out. Surawong has been also closed but it is possible to pass through the block with a motorbike going in the direction of MBK. This whole section of Rama IV is completely empty, dotted with orange plastic barriers, razor wires, and small groups of soldiers sitting in the shadow. The place is surreal as compared with normal life but the atmosphere is relatively relaxed. I drove down the empty Rama IV, passed Wat Hualampong where monks walk pass three green chairs where military sit in full gear, guns sitting at the base of a tree and three motortaxi drivers on their bikes waiting for clients that I doubt will ever arrive. At the intersection with Ratchathewi orange barrier and razor wire block completely the street. I tried to go back and a soldier told me just to get on the foot path and drive back to Surawong. I am not sure if some teargas was used here before but the air hitches. I drive back return to Narathiwat. Sathorn also now is completely closed all the way, but here police patrol the area. Back into Soi 7 and Suan Phlu when now just a small group of tuk-tuk drivers are stopped at the intersection. I decide to go check the situation in Ngan-Dumphli. As I drive in that direction many people are getting out. I arrive to the end of Ngan-Dumpli. The narrow soi seems completely closed from what look like a localized storm cloud. 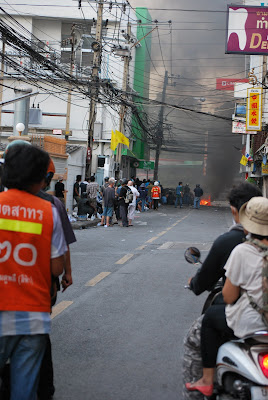 The thick wall of smoke almost covers completely the small space between the buildings on Rama IV. The crowd is much bigger than in the morning and the tires have been piled up. Molotov as well went “pro”. Larger bottles and higher success rate. Tires are constantly made roll into Rama IV and light up with a small battery of Molotov, to cover the visibility to the army toward the other red barricade situated 300 meters down Rama IV in the direction of Klong Toei. 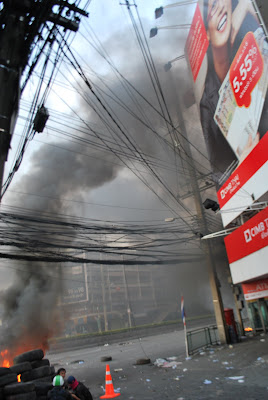 Everybody is wearing a white mask covering their mouths that are distributed by a guy on a motorcycle down the soi and pushed toward the left wall of the soi, as they say two people have been shot dead and a paramedical injured there from the buildings overlooking the soi before I arrived. Three bullets holes in a window on the right side of the street seem to confirm gun shots coming from there. 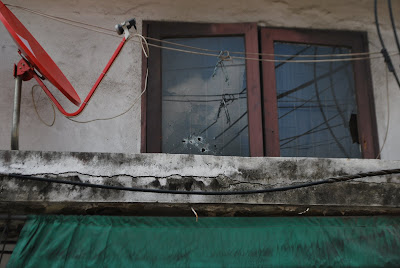 Down the soi three cars of fire fighters wait to see how the situation evolves. At the corner with Rama IV about 50 people squat behind a wall of tires, cover and dispensary for future burning. Some of them throw Molotov to keep the tires burning and stone with slingshot in the direction of the army. I have not seen any other weapon. The army is responding with whatever they can. The dry sounds of shotgun and the louder echoes of grenades fill the air, mixed with the smell of tires and petards thrown by the reds. 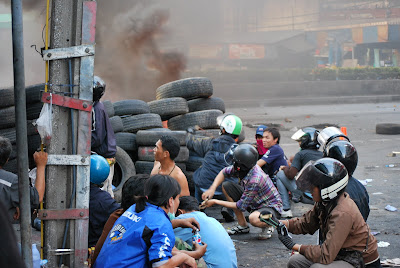 I stay there for about an hour and a half, watching the sun go down and the intensity of the shoots increase. Behind the line an older man, in dark gear and a helmet, as most of the people there, direct the movement of the people and the positioning of the tires. He is a motortaxi as well, he recognizes me (I am researching the multiples roles of motortaxis in the city) and greets me, tells me to be careful, and reports the dead of two people earlier on, shot in the head (I later got confirmation of this from a journalist who was there when it happened). Suddenly a wave shakes the crowd and everybody start running back into the soi, following the fire fighters cars. I decide to remain here so I do not know what exactly was going on or for what were they running. Rumors are there was a house on fire but I have no idea. The situation remains stable for a while with people on this side keeping the smoke as thick as possible and the military shooting in this direction and small explosions in the middle of Rama IV near the soi. On the opposite side of Rama IV in a small soi and in a building, constantly chipped by bullets another group of red shirts (none of them wears red at this point) are communicating with this side about their situation. The motortaxi driver who directs the operation shouts “speak in Khmer so they can’t understand”. Not sure if is effective with the military, it definitely is with me. As the lights goes down most of the journalists start going away, it is not the right day to be around once the night arrives. 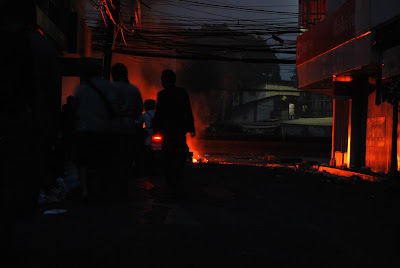 As the sounds of explosions and the flashes get closer to the beginning of the soi I decide to go back home. Enough for now.
Posted by sopranz at 11:01