I woke up with the most stunning of sunrise reflecting on the wet rice fields outside Korat. Everybody around me seems to be awake already, eating their breakfast or still sipping from a bottle. The man who can speak Japanese stands in front of the window and shouts in English “We are in the Free Zone”. I grab my camera and start shooting out of the windows, in the silent car covered by the noise of the train. 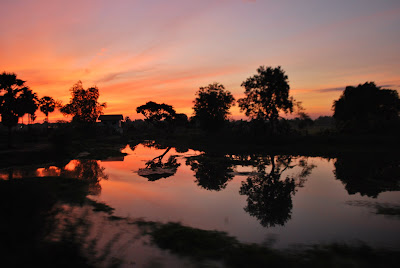 “This is not very beautiful” a man tells me “You can’t even see the sun coming up.” It looks gorgeous to me. The moment is magic and the lights enter the car absorbed by the dark orange robes of the two monks sitting down the alley from us. 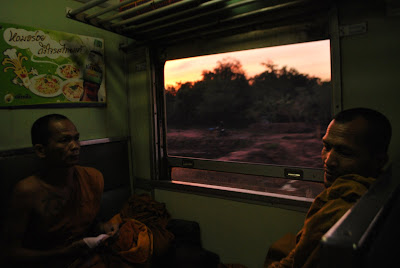 “We are in the red zone” Seth says staring at the red sky out of the window. The people in the train do the same.

Finally the faces relax as their fill their noses with the fresh smell of country side. Another round of food is served. 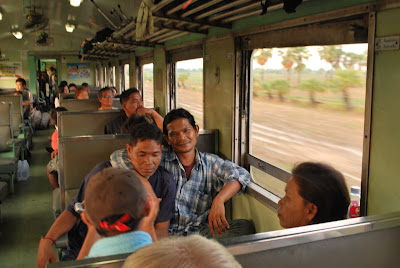 Seth and Mariko propose to have another round of interviews around. A man sits close to us as Seth starts asking him questions. We have a very long talk in which he lay out the foundations of the red shirts movement, from the 2006 coup to the present, criticizing the double standards in this country and the lack of fairness in the system. He speaks softly no anger in his voice just a very sober analysis of the history of the relationship between poor and rich in this country and the demands of the people that feel excluded from the system. Education recur as the main source of inequality.

Seth asks back “But life in Isaan is better than it used to be 20 or 30 years ago, right? You have television, electricity…” “Yes we have a better life, we are richer, and we have things we didn’t have in the past.” “So life is easier now?” I ask. “It is not, life is more difficult now. When I was a kid life was easy, you just make rice, fish and you could live there. Now is different. The whole world has developed and also Isaan but we are slower than Bangkok, so we remain back.” “So what changed now?” “In the past he says, 5 or 6 years ago, things were better, we could get money and the government had got policies for us. Now this government is not interested in us.” He keeps comparing the present with the time when Thaksin was in power somehow managing to never name him.

“Did you go around while you were in Bangkok?” “No” he answers “I stayed in Ratchaprasong only, walking up and down the protest area” “Did you like the Ratchaprasong area?” “No” he answers decided “the buildings there are too tall. You could not do anything. Snipers were there and there was nothing we can do.” He answers, mixing urban design taste and protest strategies. We keep talking for a while (I will try to post the whole interview when I have time to transcribe it) until he says he needs to go to the bathroom and walks away.

I start chatting with a younger guy, probably around 16 years old who sat through the interview listening. “I like Bangkok” he says with bright eyes “You can go have fun wherever you want. There are so many people.” “Would you want to go back if you have a chance?” I ask. “Yes” he says feeling the attraction of the metropolis that millions of people around the world share with him, including me. I turn around and fall asleep again.

When I wake up the train is stopped, in the middle of nowhere and some people have gotten off, waiting underneath small trees at the side of the train tracks. Some other people are walking through the field to reach the road to try to catch a ride to their villages, others just lean out of the windows. 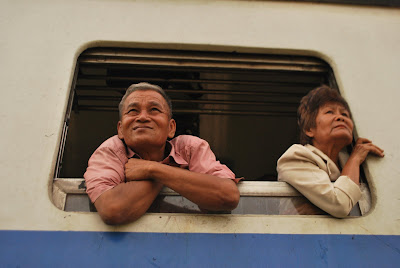 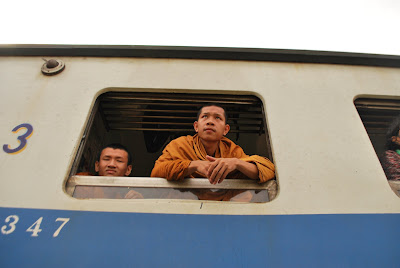 I guess we have been there for a while. I get off with the young man with beautiful eyes whom I met first at the train station. He pulls out a binocular and look pass the train to check if there is some sort of military block. We stay there for a while, burning in the hot sun.

Suddenly the crowd revives. Two young men start fighting in front of the train. Apparently one of them has been bothering and insulting the other on the train all night long, inebriated by alcohol and now in the hot the nerviness has exploded. People start to calm them as the drunken one picks up a big rock and run toward one of the window. Other people get out of the train. The small scuffle goes on for a while including some kicks and a hilarious chase in the nearby field, with many people falling on the ground, that ends with the drunken guy and three of his friends arriving to the street and hitching a ride. They have been some very hard couple of months for everybody and the tension of the last days is slowly releasing.

The train starts moving backward, gets a new locomotive and restarts again in the right direction. We are close to home. The atmosphere gets again tense as news come in that military are waiting at the train station in Udon. After talking to each other they decide to get off in different small stations before Udon so to leave the soldier puzzled over the disappearance of the red shirts.
The young man and the other people I sat with in the train station the day before invite me to go to the house of one older woman, rest a bit, and eat together before heading with him to the house of my motortaxi friend who lives in the country side outside Udon, where I will sleep that night. I accept.

Besides all their sorrow and sadness for what happen in the last days and for having to leave the city without having achieved what they went there for the happiness and relief of arriving home after months of being away spread on their faces as many people put their heads out of the windows and simmer the wind of home. Smiles are back on people faces. “I haven’t seen my husband for two months” the old woman who will host us says as her beautiful wrinkles curve around her mouth. We stop in a small train station and get off, about 20 of us. For the first moment in the last days the tourist adds of “Land of Smiles” does not sound like a bad joke. 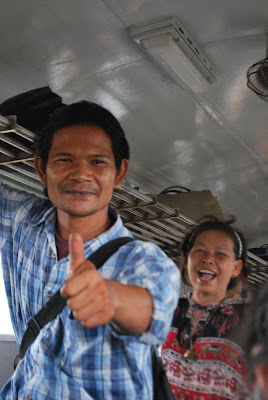 all of your reports are insightful, thank you.

Excellent, sensitive, insightful descriptions which hint at so much more than you literally describe. I had so wanted to take that train with you all. Now, having read your blog, I feel almost as if I did. Thanks.